Colorback Project is located 10kms southwest of the township of Crescent Valley and is accessed directly via paved state route 306 being some 40km’s south of interstate highway 80. Elko, the closest major town is located 90km to the northeast and is reached by travelling northwards along state route 306 then eastwards on interstate highway 80 for a total travel time of approximately 1 hour. Given the proximity to very large mines the Colorback Project is accessed by, and located near, well established infrastructure.

The Battle Mountain Trend is a remarkable gold province that hosts several world class gold deposits with a total production and reserves of more than 100Mozs Au. The giant Pipeline deposit (20Mozs Au), Cortez Complex (15Mozs Au) and Barrick’s recent Goldrush and Fourmile discoveries (+15Moz Au and growing) are all located within 25km’s of the Colorback Project.

Sierra Nevada’s Colorback project displays several key similarities to the nearby world-class Carlin gold mines such as the Pipeline deposit and the Cortez Complex deposits. Importantly, controlling structures from these deposits transect and intersect within the Colorback Project. Sierra Nevada through its data acquisition and exploration program has identified large scale fertile structures with the potential to host a significant Carlin style mineral system.

The Colorback Project is situated close to several world-class gold deposits within the Battle Mountain Trend. The main target for future exploration remains where structures intersect Lower Plate carbonate-bearing rocks below the current depth of drill holes. The Colorback project displays several key features like the nearby Carlin-style mineral deposits in the Battle Mountain trend (i.e., Cortez and Pipeline deposits) which include:

Better results from these drilling programs include;

Drill holes have intersected carbonaceous units which are interpreted as the lower part of the Upper Plate sequence, which suggest proximity to the highly prospective Lower Plate units. 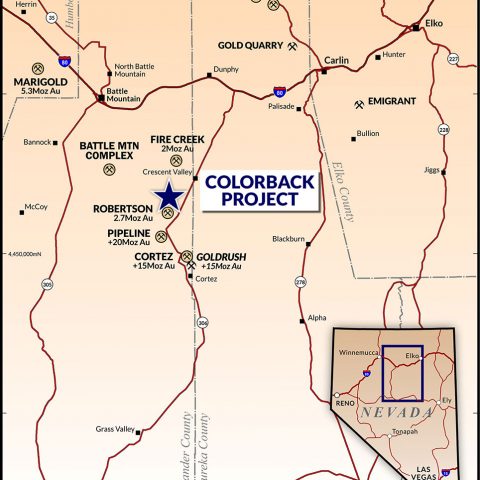 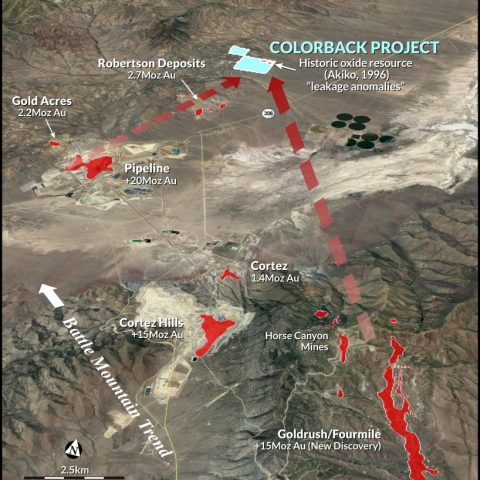